I'm excited to unveil a new Ascent recording for you, Empty Streets.   It captures the rock sound we've been featuring during our gigs this year.   An upbeat, catchy song about the last survivors of the human race after an epidemic!    Why not?


I wrote this song about two years ago, mostly in my head while out on a long bike ride.   It's gone through several major stylistic changes since then.   As I mentioned on this blog back in 2014, I'd asked Christina to supply me with two random words as inspiration to write lyrics.   In this case it was "Epidemics" and "Oil Drilling."    She was mostly asleep at the time, you see.  You might not imagine these odd topics would lead to any coherent idea, but when I'm "getting away from it all" on my bike, my brain works overtime.  If I focus on an idea long enough, it gains new life.  I've always loved post-apocalyptic fiction - e.g. The Stand, Oryx and Crake, Dog Stars, Walking Dead, many more.   So my mind went right to this idea of a few survivors huddled together by candlelight, thinking back on how they got here.  The past looks beautiful, seen through the eyes of the end.   And no way to get back there from here.  Nature reclaims the city. The ironic setting is a "city of power," where all the oil and electricity used to come from.

As I've said before, writing lyrics usually suggests a melody to me right away, especially when I'm going over and over the words in my mind because I can't write them down at the moment (you need both hands on the handlebars, you know).    And most melodies suggest chord changes.   I've done this enough now I sort of know what the chord changes are without playing them.  So this song basically wrote itself right away.   When I got home, I figured out what the chords were on the piano, and that was that.

The way I originally heard this song, it was strictly a piano-driven thing.   It had subdued drums, and a feel similar to the song "Bad Company" (by Bad Company, from the album Bad Company!).    Maybe some eerie-sounding guitar over top.  I imagined we'd record a version of it that sounded that way.

But when we play gigs, I don't play piano.   I play guitar, electronic drums, samples and a looper pedal.    We first learned to play "Empty Streets" as a slowish acoustic guitar song.  We played it at a coffeeshop gig that way at least once.    When it came time to play it at a bar gig, it needed to be updated to be more upbeat.  Just playing the piano part on guitar sounded boring and repetitive.   So I made up the riff at the start of the song to make it less repetitive.  This worked well for our live arrangement, because I could loop the riff and then play the drums and loop that.   And for some reason I decided to play those little ska-rhythm chords over that.    On the verses, I played a clean chorus sound to simulate the piano part over the drum loop.

Sometime after breaking my collarbone in October 2015, and going through the recovery after that, we reinvented our live sound to be more consistently rock-oriented.   Christina is as responsible for our crunchy sound as I am.  Maybe more so.  A gave her a little guitar power and she demanded more.   So the clean guitar sounds on this song were dispensed with, and it got crunchy. 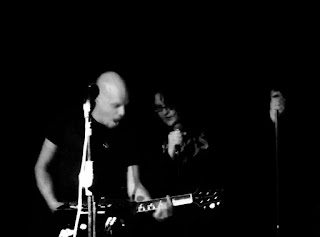 The recorded version of the song is influenced by the current live version.    It's not exactly the same, because it's not looped.   On the recording, I played acoustic drums and bass, and a few layers of guitars.   No keyboards whatsoever.   I could bore you all day with all the work I put into getting the drum recording to sound good, but I won't.   I'll just say I recorded it in our living room with a whole bunch of microphones, and I did it over and over until I figured out the mic placement that really worked.   I mixed in more overhead mics this time.   The guitar is my PRS, and the guitar amp sounds come from the GT-100.   The effects and amp settings are the same exact ones I use live.

Christina is a monster vocalist.  You can hear her power and passion on full display here.   She knows how to take the melodies I write and make them real.  She puts her own personality on them without fundamentally changing them.   She adds a sense of the blues and a "singerly-ness" (I just made up that word)  I simply don't possess.  I think this one was really easy for her to record, because we've played the song many times and she's got it down to a science.

I'm very happy with how this recording sounds right now.   I will probably go back and update the mix on Jane Doe and For These Crimes to be closer to this overall sound.  They are so last year!   The rock version of Disappeared is already recorded.   I'll be working on mixing that one down next.

Update: Here's the lyric video for the song: